Oldgas.com Home
The company of the month for September, 2007 is Ashland Oil. I worked for Ashland from 1971 to 1979, so in addition to my Mobil-related stuff, I have a few items from Ashland, Valvoline, and Freedom. Here's a list of companies and brands that became part of Ashland over the years:

I'm by no means an expert on Ashland, but I'll be posting a little information on their history and pictures of the globes, signs, cans, and maps in my collection. For this COTM feature to even come close to last's month's great one on Conoco, you folks will need to pitch in by adding pictures of your Ashland-related items and any history you might have on any of the companies listed above.

If you have pictures but don't know how to post them, send them to me via the email icon above and I'll get them posted for you.

Richard
Here's the glass version of the Flying Octanes with the green lettering, but no Ethyl: 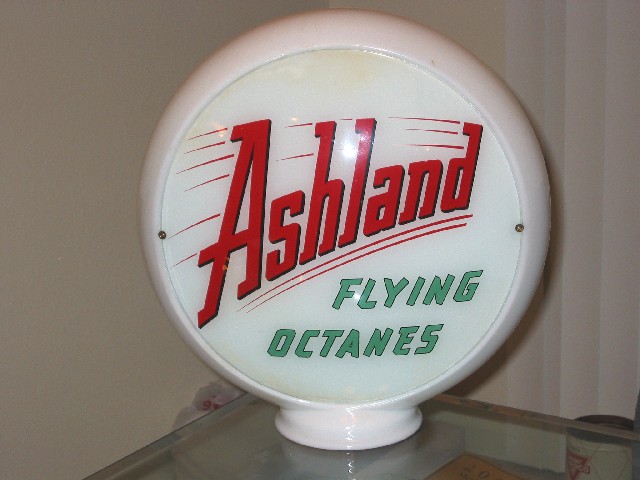 Wes
Following is a brief history of Ashland Oil as it appeared on their website around 2002. The current website for "Ashland, Inc." doesn't include this information.....I suspect that's because Ashland now calls itself a "diversified chemical company".......it no longer owns any oil and gas related businesses.

1942: As part of the government's World War II effort, an aviation gasoline plant is built near the Catlettsburg refinery. The aviation fuel plant later becomes Ashland's No. 2 refinery.

1946: Products are sold for the first time under the brand name "Ashland".

1966: Ashland enters the highway construction and construction materials business with the acquisition of Warren Brothers.

1975: Construction division is formed, and Ashland Coal is created.

1981: New corporate strategy is adopted to strengthen refining and marketing, improve the balance sheet and build earnings from related, non-refining businesses. Ashland is reorganized as a modified holding company.

1991: Ashland nearly triples its domestic crude oil gathering capacity through the acquisition of The Permian Corporation and its merger with Scurlock Oil Company.

1992: Ashland Chemical acquires most of Unocal's chemical distribution business, establishing the IC&S Division as the No. 1 distributor of chemicals and solvents in North America. Ashland's annual sales surpass $10 billion for the first time.

1995: Ashland invests more than $368 million in 14 acquisitions to strengthen its related energy and chemical businesses. In addition, shareholders approve changing the company's name to Ashland Inc. to better reflect the company's diverse operations.

2000: Ashland's board approves a plan to distribute a majority of Ashland Inc's shares in Arch Coal Inc. to Ashland's shareholders.
Here's a picture of Sam Cooper's ("Savinsam") Freedom Oil items:

Now wouldn't those two look good sitting side-by-side!!!
Since this thread is about Ashland, I assume you want stuff from the other companies at the time of merger and later?

So SuperAmericaMan........this threads for you........bring it on!!!
I have never seen a real SA globe, If someone knows of one please let me know.

I always am interested in a company marketing area ? I only remember seeing 2 Ashland stations in Michigan and one of them was only for short time, it later marketed using the Independent brand.
As I got into to petroleum transportation I found that Ashland had a pipeline terminal in Michigan. They didn't have a strong wholesale market in the area at the time that I knew of. Was Ashland planning on expanding there branded stations in Michigan?
Nice maps, Dave........thanks for posting them. Ashland's expertise from the outset was in refining, and you'll notice in the "history" post above they were in existence for 22 years before they started marketing under their own name. When I worked for them in the 1970's, their marketing area for the Ashland brand was mostly Kentucky, West Virginia, and Ohio. I doubt there were serious plans to expand much into Michigan. Thru acquisitions they expanded their retailing operations, but didn't seem to be quick to re-brand the stations. They thought of themselves as a large independent oil company that sold most of their refinery output to other independents. Ashland did own an extensive network of pipelines and terminals.....mostly to move refined products to key sales areas. After They aquired the Superamerica brand in 1970, there was a major effort to expand that brand and the new-at-the-time concept of a "convenience store" station. That idea caught on BIG TIME......now almost every gas station is a convenience store as well.....no matter what brand of gasoline they sell. Ashland is largely responsible for that industry change.

Richard
Here's a bit of trivia for this Ashland thread...

J. Howard Marshall was named President of Ashland Oil in 1944. He would later hold executive positions in other oil companies and establish his own enterprises. And of course, Mr. Marshall would later marry Anna Nicole Smith in 1995 at the "young" age of 89!!

Inquiring minds want to know!!
Some 5 quart cans I think Galena is part of Ashland also thanks Don

Tresler-Comet, Red Head & Frontier of New York maps. I think the tank wagon on the Frontier map is neat.

The auction catalog for the Pepper globe described it as the "only one known"......not sure why, but most others I've seen were on metal bodies, so may be the smaller size on a glass body.

3 Ashland signs from the former local Ashland station. The 2 on the building now belong to Fuzzy a maybe soon to be oldgasser. The bottom one is under a coat of paint still doing service.
Thanks Dave for the sign pictures!! Speaking of signs........here's a few of mine.........

Richard
Here's a couple of Aetna globes, again thanks to Aumann Auctions.......

CAN you post pictures of your Ashland related CANS? Sure you CAN!! I CAN show pictures of my CANS!! Did someone says something about CANS?? Here's a few larger sized ones...........

Based on the participation so far, it would appear that Ashland isn't a widely collected company....at least by Oldgas members. But just in case you're interested in learning more about the company's history, here's a few sources you might want to hunt up:

1) “Blazer and Ashland Oil, a Study in Management”. The author is Joseph L. Massie and the publisher is the University of Kentucky Press. Copyright 1960. (this book is currently available on eBay from seller "alldaypicker")

2) "E PLURIBUS UNUM", author Paul G. Blazer, published by the Newcomen Society, copyright 1956. Author was President and Chairman of Ashland Oil and Refining Company, Ashland Kentucky. (this sold on eBay less than a month ago)

3) "The Exception – History of Ashland Oil & Refining Company", by Otto J. Scott.
Published by McGraw-Hill in paperback in 1968. The author was commissioned by Ashland to write the book. (this is available on amazon.com)

When I started working for Ashland in 1971, "The Exception" was given to all new hires. I lived in a rented house in Ashland, KY for a month until my wife and kids could join me. Since I was without a TV and had virtually no furiture, I read the book during that first week. Somewhere over the years it disappeared.......so I don't have it now when I could finally put it to good use again.

I do remember at least one thing from the book. The book discussed the company's first auditor......don't recall his name but he worked for the company in the 1930's. While climbing on top of a large crude oil storage tank to measure the quantity of oil inside, the roof caved in and the poor fellow drowned in the oil. I worked as an auditor for Ashland for 8 years......needless to say I was extra careful when I had to strap storage tanks!!

[This message has been edited by pegasus (edited 09-13-2007).]
Drowning in a vat of oil would SUCK! What a way to welcome you to the company. 'welcome to our team, hear is the way the last guy died...'

Keep it comin. I have nothing to add but I am enjoying it.

If anybody has a single 15" lens that they would be willing to part with - drop me a line. I've only got the one side on this globe. I put one of our 'frosted' lenses on the backside.

[This message has been edited by T-way (edited 09-14-2007).]
Speaking of Valvoline, I have an old steel oil barrel with the big heavy rings around it which has raised letters on top saying, "valvoline company, New England Dept." Does anyone know where at in New England this plant was? Sam
Sam........can't help you on the Valvoline New England location.........but I can post more pictures of my Valvoline cans......

Of course, this sign has ABSOLUTELY nothing to do with Ashland, Valvoline, or any of the other companies associated with Ashland........but I just couldn't resist posting the picture anyway!!!

Valvoline Imperial gal from Melbourne Sydney Australia- strange can as its smaller than a Canadian Imp gal ??

But he's just SO CUTE I couldn't resist!!! There actually is a connection......his dad was born just one month after I started to work for Ashland back on September 1, 1971.

Richard
Richard, a man that used to work for Freedom Oil Works long ago told me an amusing story about how the "F.C." came to be that's on their oil cans. It was just on a whim at the moment when trying to come up with a name. But now many years later, I can't remember what the F.C. stands for. Do you know? Sam
Can't help you Sam.......I don't have a clue about what the "FC" stands for.......maybe someone else out there knows and will share it with us.

I did notice via eBay that Freedom High School in Freedom, PA. has a Bulldog as their mascot (the "Freedom Bulldogs"). I think the company was founded in the 1870's, so I'm guessing the oil company came before the high school.....if so, then it's likely they picked their mascot from the oil company logo. I wonder how common that is?

Next is a license plate attachment.....

.....and the second is a framed CREPE PAPER sign.....I assume it was meant to be hung in a station or store window....it's one of my favorites.

(I had it framed....it came to me rolled up in a cardboard tube)

Richard
This is my last Ashland-related item, and probably the best. It's a 30" double sided, painted metal sign that would grade out at least 9.5+ on both sides......and actually does qualify as a "new-old-stock" piece.

It came from Canada and included the following information from the previous (second) owner........."We owned and operated the old general store that the sign was originally mailed to. The store has been in operation since about 1911, and the previous owner, who died back in the 1970's, was an honest-to-goodness packrat! The sign was found in its old original cardboard mailing package in a dusty corner of the attic. It's marked Fairbanks Fiber Box Co. in Middletown, Ohio and is addressed to Matthew Watson, Carcross, Yukon Territory,Canada."

The sign itself is marked "Made in U.S.A.- Fogarty Dayton Ohio - 3215". The sign's never been used, and was hung for the first time on my wall. I also have the above mentioned original packaging.