Oldgas.com Home
Is this globe the only one or have others been seen.
Why did shell support the nazi group if there from the us.

I did read the description but still thought to inquire.
I do not have any info on the globe but the swastika symbol was not first used by Nazi Germany. If I recall, it was also a good luck symbol among other things before the Germans adopted it in probably the 1930s.
The swastika has been used for thousands of years by many cultures for varying reasons, usually it represented good, not what it is thought of today. It was used to represent, life, the sun, strength, power, and good luck among other uses. Check it out on the web. It is mainly in modern times due to Hitler, it is related to hatred and evil.
John, do a little history on the Swastika... Before making totally bogus statements!

During WWI the American Army's 45th Division had a Swastika on their shoulder patch.

The Swastika has been used as a symbol in the Far East since before Christ...

Different American Indian Tribes used the Symbol since the 1800s...
John,
The war caught a lot of foreign companies directly and indirectly collaborating with the new Nazi regime in Germany. The list is impressive: GM, Ford, Kodak amongst others as well as Royal Dutch Shell. It is said many of the German army's mobile transport units were built by GM's and Ford's subsidiaries and some of the planes too. While Shell's relationship with Germany is well known it wasn't that simple. My mother grew up during the war on the island of Curacao where the refinery which took Venezuela crude, refined it to oil and then sent it on to the Allies was owned by Shell. The ships transporting crude and oil were subject to U Boat attacks. Mom remembers some of those attacks although the people on the shore were safe from effective bombardment. Here is a link describing some of the foreign (to Germany) companies that were involved with Nazi Germany

http://www.ranknfile-ue.org/uen_nastybiz.html
The swastika on the globe is facing the opposite way compared to the German swastika.
I thought the energina wording was used by BP but could be wrong i guess..
Just to ring in on this...The Swastika is backwards and is a sign of good luck...The courthouse in Marietta,OH floor is covered in those... So it isn't a Nazi affiliation at all... IMO Marietta Courthouse
..

http://www.ebay.com/itm/171268586757
Several companies used it before the Nazis gave it a bad name it's an ancient symbol. Troco used it, in Oklahoma it was an Indian peace sign, direction it faces doesn't make any difference. I can't imagine how horrifying it would be to have a warehouse full of these cans at the outbreak of the war. 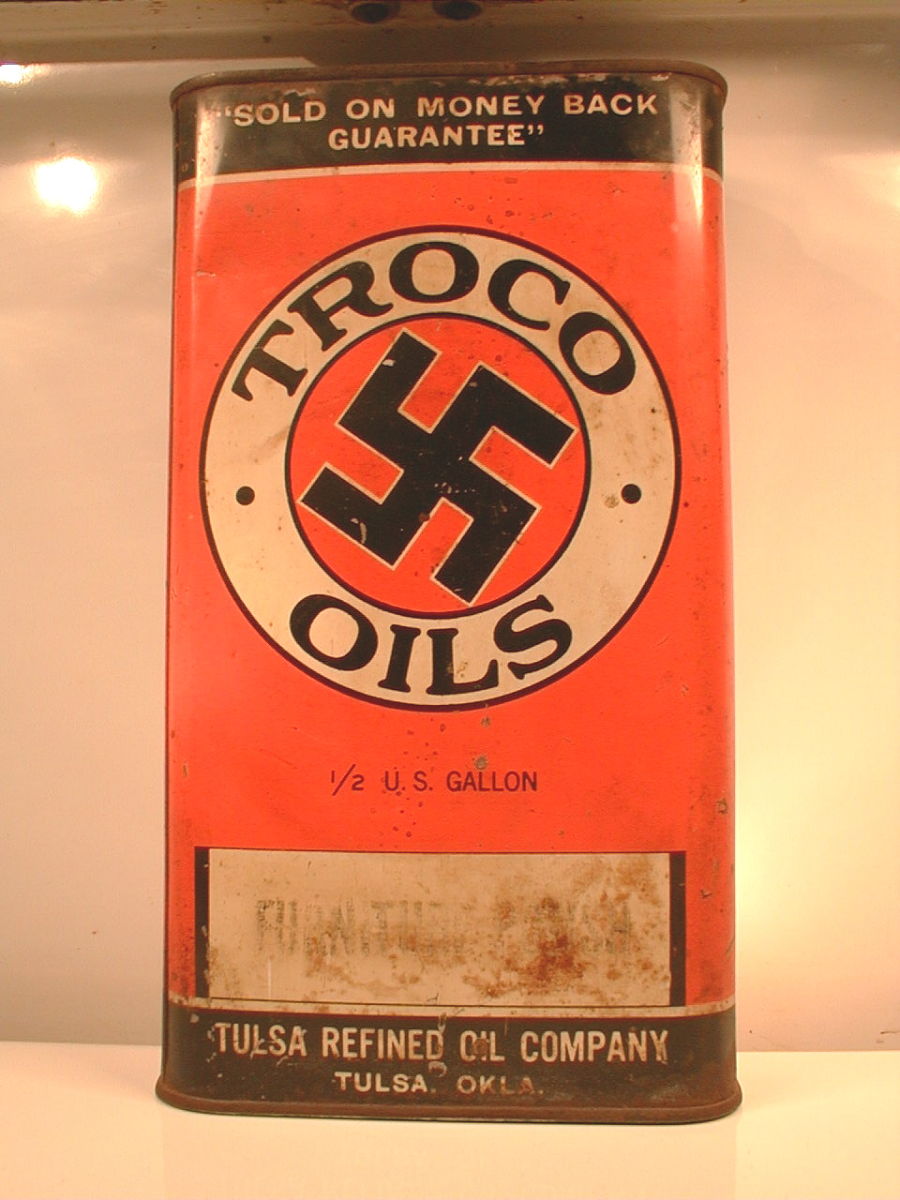 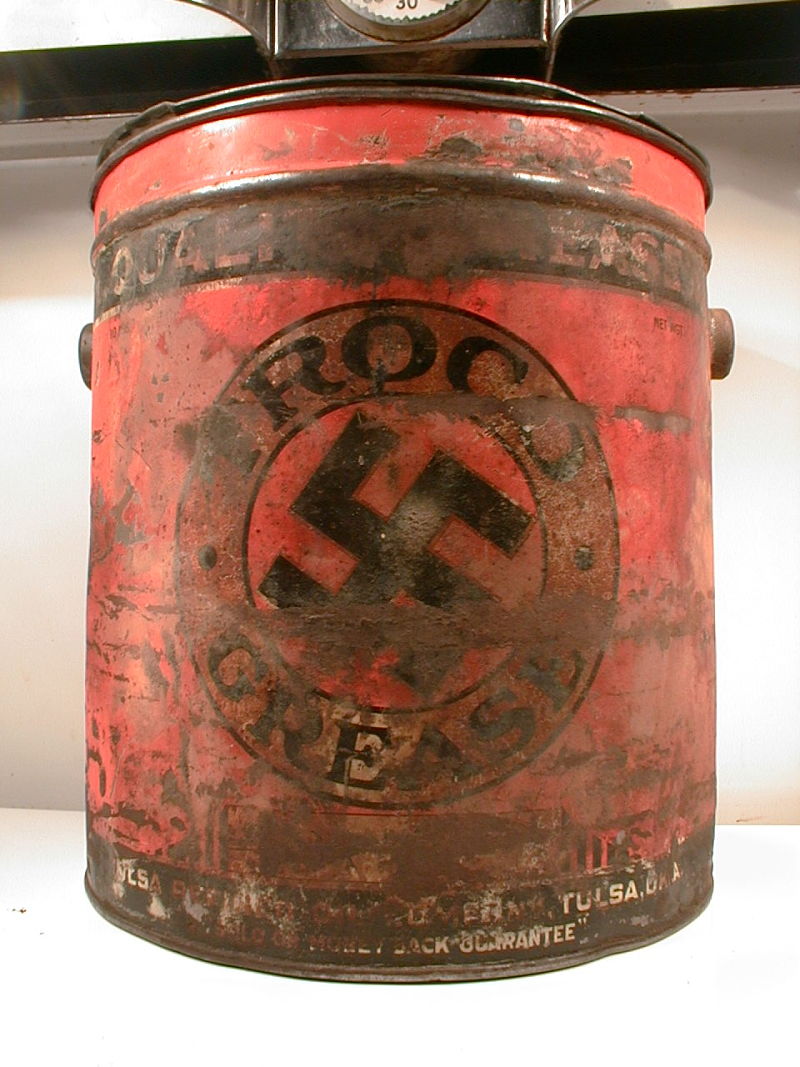 Originally Posted By: Keystone Gas Man
Just to ring in on this...The Swastika is backwards and is a sign of good luck...The courthouse in Marietta,OH floor is covered in those... So it isn't a Nazi affiliation at all... IMO

Need all the luck you can get on court day! Sorry its late.

i'll be darned.....learn something everyday!
Jay that has to be a pretty uncommon can. I would imagine their stock of cans disappeared and were destroyed. Are they now deemed desirable? The color scheme is un-naturally close as well.
Didn't take them long to box it in to this logo. yes I doubt that many survived but as far as desirability goes I would sure take all I could find with the peace sign. 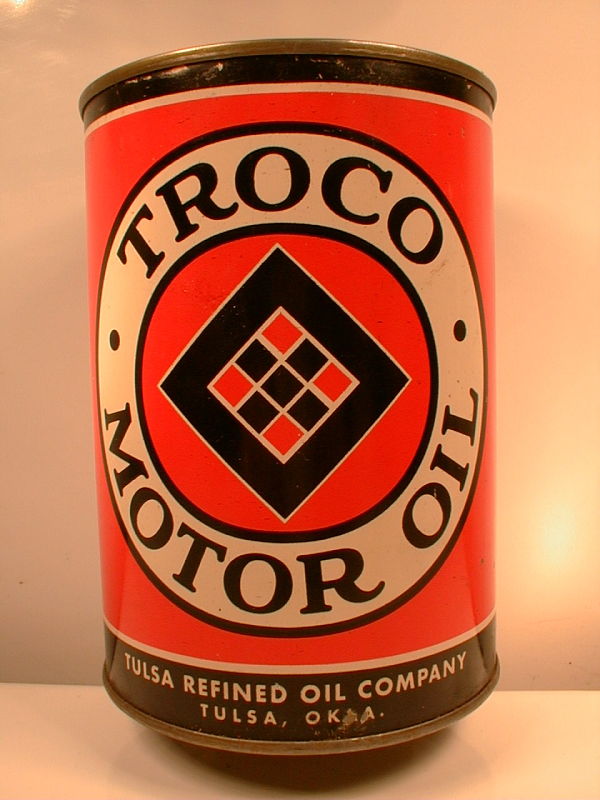 I have seen this logo on a few globes over the years, some foreign, some American. Correct on the logo in that it was a good luck symbol before the Nazis ruined the image, even though it is facing the other way. Scott B.
Hey guys, just got back from hiking the Himalayas in Bhutan in the fall. It is a Buddhist nation. You will see the mark of the swastika facing the opposite direction as was used by the national social party in Germany of the 1930s and 40s. It is historically a symbol based on a cross representing the solstice and the equinox. It is used to represent prosperity in Hindu and Buddhist religions as well as Jainism in India. The swastika when repeated as a pattern makes a never ending cubist style knot. You will see it everywhere in many parts of the world from being integrated into clothing trim or creating the pattern for a carved decorative screen or hand railing. The symbol was used and unfortunately the meaning has been molested based on the Nazi parties usage.

I hope that helps.