Oldgas.com Home
Just came across three items using photos of items from Morphys upcoming auction...Richfield Globe, X-Liquid cans and sign and a Mobiloil Wadhams can. I will attach a photo to show what I mean. 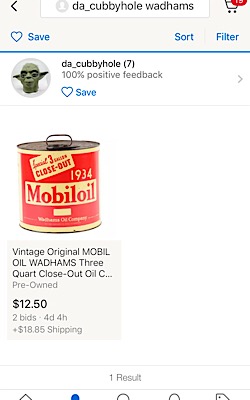 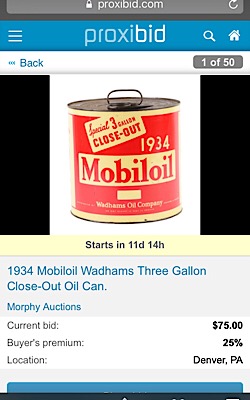 Thanks Chad...had the Wadhams in my watch, nicest one I've seen.
notified E-BAY So lets see what goes down!!!!

Please report all the items to e-bay as I have and lets see if they finally do something!!!

MORPHY AUTION PHOTOS BEING USED ON E-BAY BY SELLER

I noticed a Skelly lube rack that was also from Morphy's on eBay by this seller. I put in a bid just to see what would happen and a few days later I was notified by ebay that the seller canceled my bid and ended the auction. Not sure what his game is here?
No problem at all, Darin. And all items reported, Mike, good idea.

Odd choice by the seller...either lazy or not very smart. They took the time to list over 250 items, which takes a hell of a long time, so either they're all fake or they got tired of taking pictures. Laziness seems doubtful as I find it hard to believe a Wadhams Mobiloil can in that condition pops up alongside Morphy's at the same exact time. But, if one were to argue for laziness, a Google search for that can yields only Morphys can and one other that is too jacked up to be worth using. If it wasn't for the two other identical lots and the low ratings (if any as a seller) I would give them benefit of the doubt but everything leads me to say it's BS. Strange
Originally Posted By skellyguy
I noticed a Skelly lube rack that was also from Morphy's on eBay by this seller. I put in a bid just to see what would happen and a few days later I was notified by ebay that the seller canceled my bid and ended the auction. Not sure what his game is here?

I've seen sellers like this pop up, get their money and disappear screwing either PayPal or eBay. Not sure if that's what he's at, only time can tell.
Looks like I need to fill out a return...
So this morning another Wadhams in lesser condition showed up. I clicked on the listing and it appears to be the same seller? What am I looking at here folks? Did they change their name or selling under another account? It looks like all the same stuff. I'm confused, lol.....confused but NOT bidding nonetheless!!
Darin

It looks like the person has items, but was too lazy to take the pictures himself??

Do NOT buy from this person. I tried to buy a green ripple, and he would not send me pictures and proof that he owned it. I got my money back. Person was a pain to talk with when you assumed he didn't have the items?
So THAT's why you haven't brought that ripple by my place to show it off Noah....