Some History on the Company:

The United States Rubber Company's member firms made shoes that were commissioned by a central sales unit. A board of directors supervised the central selling organization, and the manufacturers operated with virtual autonomy. The new company shifted its assets early on, closing two small factories and acquiring two of its biggest rivals. By 1898 the United States Rubber Company increased its market share from 50 to 75 percent. The company, however, was turning only modest profits, due primarily to the financial strain of absorbing its competitors. As the 1800s ended the rubber industry was rapidly shifting its focus to tire manufacturing for the automobile industry. But U.S. Rubber ignored the industry changes and chose to remain solely a footwear company.

The new tire market turned high profits and companies competed heavily for top market shares. One of the industry's leading firms, Rubber Goods Manufacturing (RGM), saw its position in the industry gradually decline. In 1905 U.S. Rubber bought RGM as a means of entering the tire market. Immediately, the former footwear company was the top tire producer. As treasurer of U.S. Rubber, Charles Flint went to Brussels, Belgium, in 1906 to secure the entire rubber output of the Belgian Congo from King Leopold. U.S. Rubber was seen as one of the tire industry's most significant newcomers.

The Du Pont family took control of U.S. Rubber in 1927. That same year, Du Pont and other elite industrialists wanted to consolidate U.S. Rubber, Goodyear, and Seiberling companies in order to establish a powerful industry leader. The idea failed to win support from financial institutions and shareholders that were unsatisfied with the industry's performance during the 1920s. With the onset of the Great Depression (1929–1939) in 1929, tire sales dropped by two-thirds and suppliers lowered prices for car manufacturers in order to maximize sales. In spite of these industry setbacks, U.S. Rubber thrived. It increased its market share from 6.9 percent in 1929 to 30 percent in 1931. The company's success was linked to Du Pont's interest in both U.S. Rubber and General Motors Corporation. U.S. Rubber's manufacturing base was in Detroit, Michigan, and General Motors' nearby location gave U.S. Rubber half of the carmaker's business in 1931. U.S. Rubber was simultaneously boosting its sales to Ford Motor Company.

The company held a key position in the tire and rubber industry for four decades. In 1966 U.S. Rubber changed its name to Uniroyal. In the 1970s, due to the recession and to the development of radial tires which required totally new production equipment and processes, the industry began to shift. Uniroyal was among the companies hardest hit. Though it was ensured a good market share with its General Motors contracts, the overall depression of the car industry and the expensive switch to radials overwhelmed the company finances. Adding to that, Uniroyal's sales on replacement tires were low. The company's losses in 1979 were heavy enough to lead to drastic cuts in capacity in 1980. In the mid-1980s Uniroyal sold many of its divisions and organized a buy-out by Clayton and Dubilier. In 1986 Uniroyal and Goodrich merged their tire operations to form a jointly owned Uniroyal Goodrich Tire Company (UGTC). The new company would combine Uniroyal's strong supplier business with Goodrich's large replacement business. But the venture wasn't successful. Debts, losses, and conflicting management styles brought the company down. In 1987 Dublilier and Clayton bought out Goodrich's holdings in the venture.
NOS sign dated 1948. 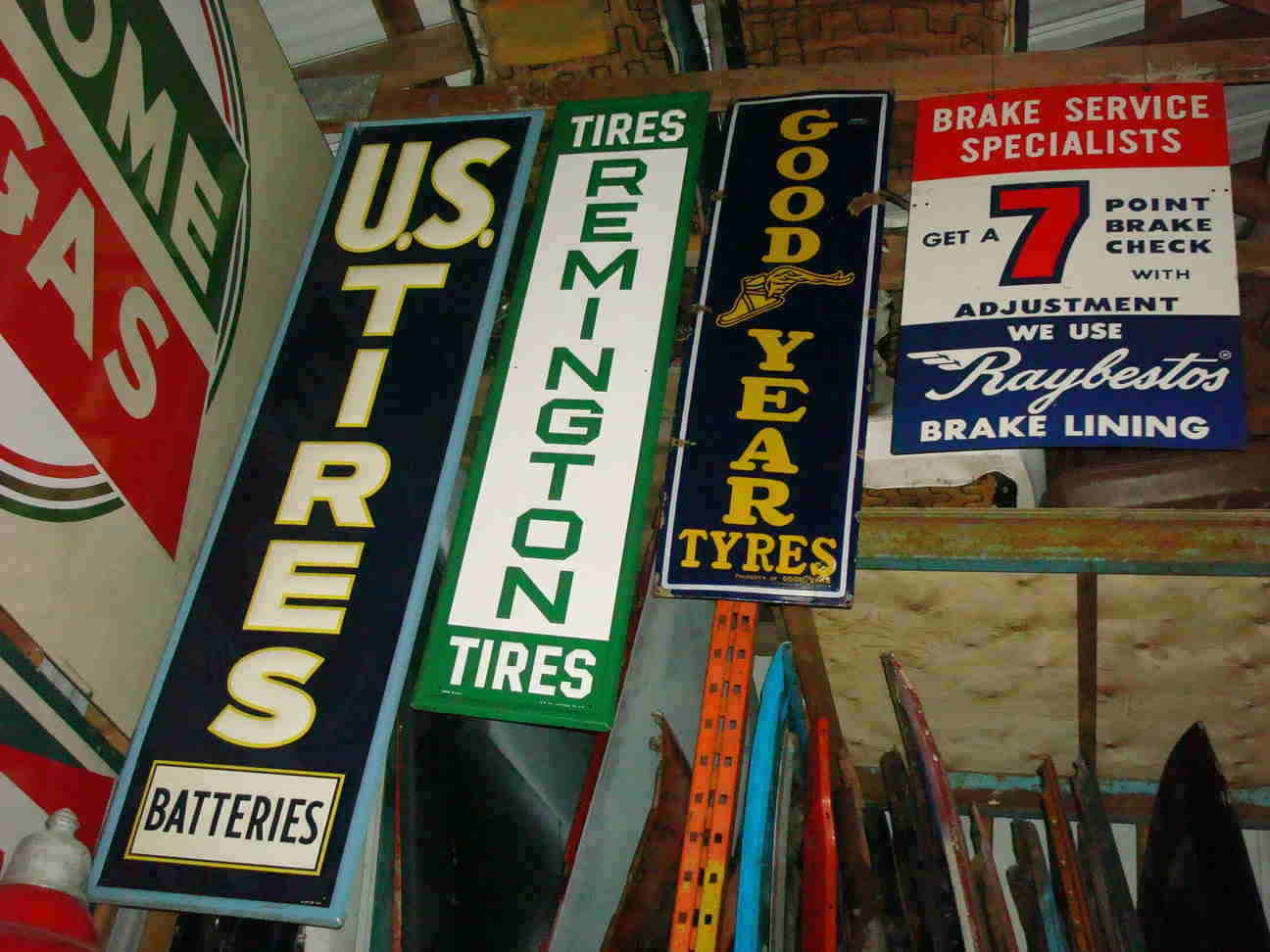 I have one US Tires sign. The letters are blue, not black as they look in the picture. It has heavy shelving and I think the blue and orange colors were used before the blue and white. I have also seen a vertical version of this sign. I think this sign was made in Coshocton Ohio but am not positive. Here are two of my best US Tire pieces.. The wood framed stand up is supposed to be a tri-fold but is missing one section, I'm hoping to find the missing piece eventually... The tire stand is die cut tin riveted to a wire tire holder. The last two items are from a good friends collection, they are two of the best tire pieces you'll ever see!! 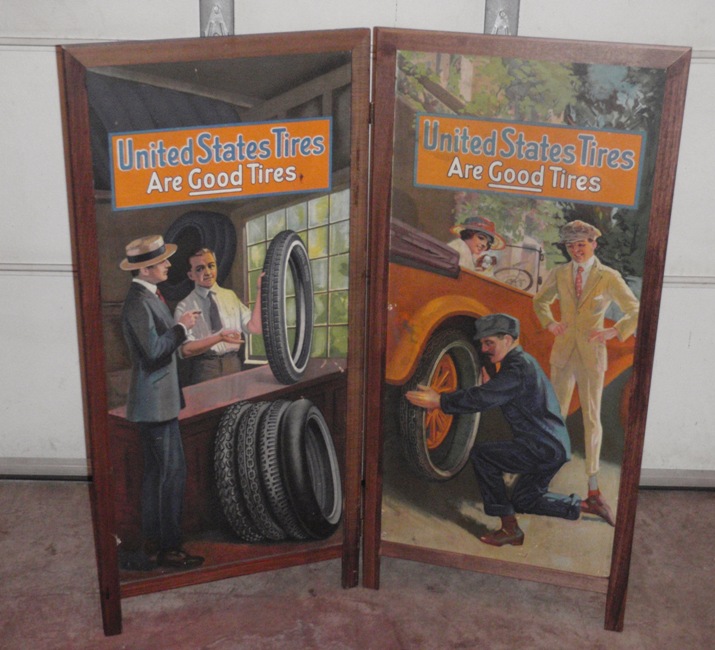 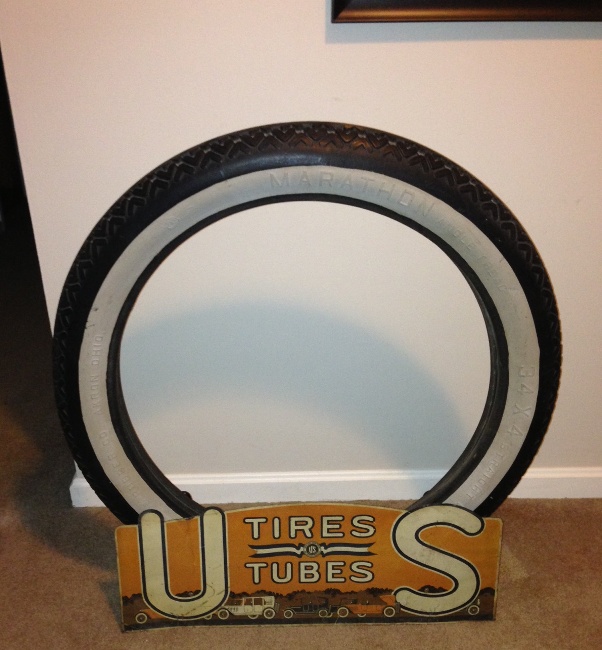 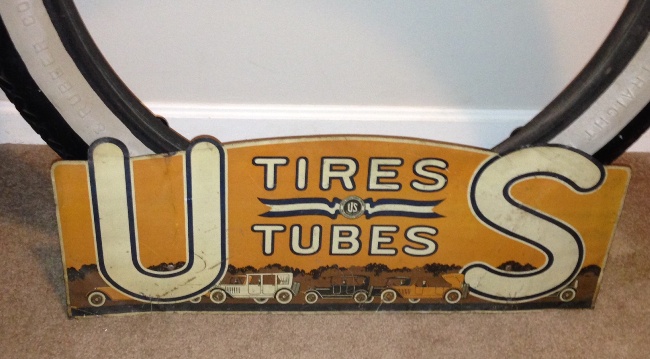 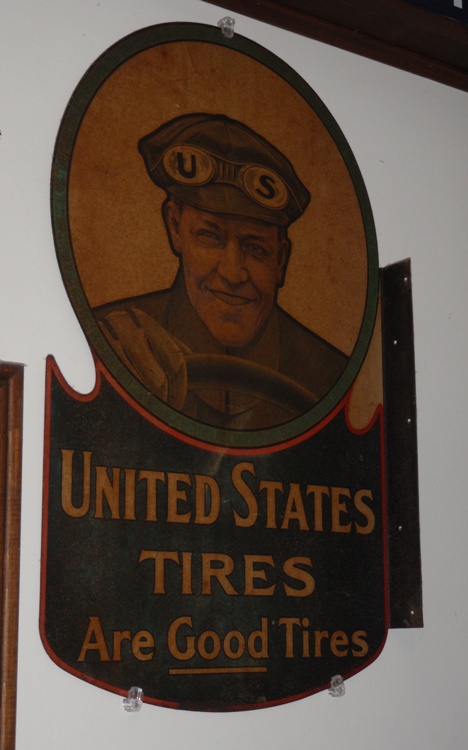 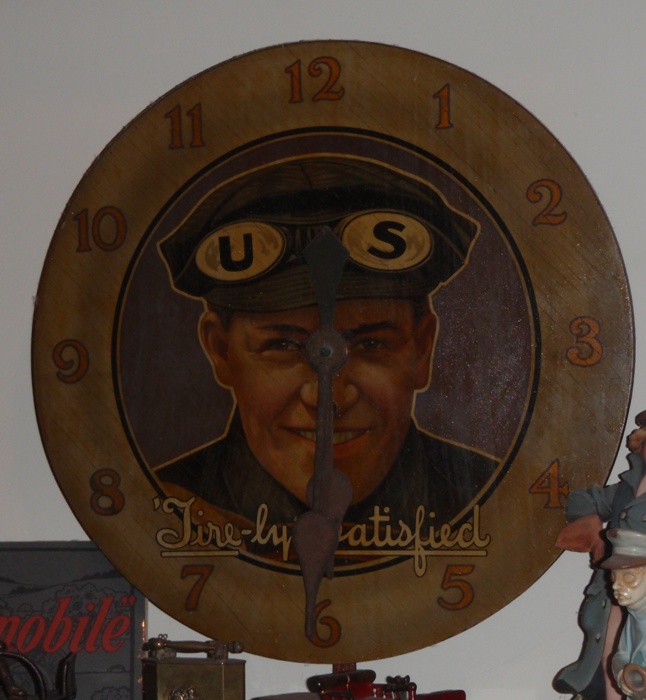 Originally Posted By: gmstuff
The last two items are from a good friends collection, the they are two of the best tire pieces you'll ever see!!

Here's what the center of Kieth's display looks like. I have more US signs but they're stashed somewhere, here's a few neat pieces.

Neil, you are my hero! Let me know when you have your next yard sale!!
LOL, talk to my wife, she threatens me daily, I took over 4 upstairs bedrooms, her pantry and pieces of other rooms until I get my gameroom finished
CURB SIGN 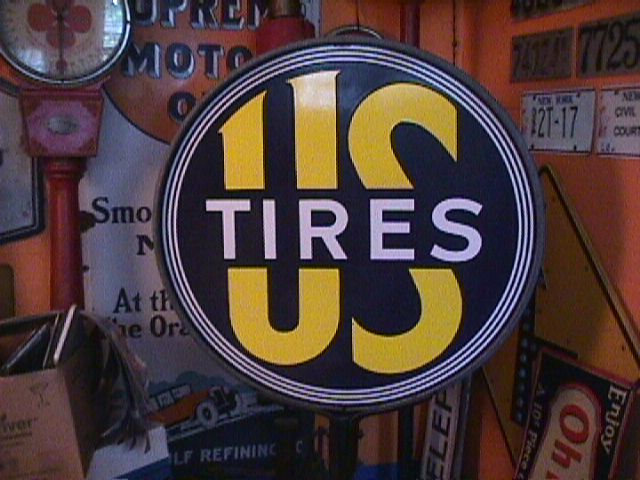 Wow...very nice signs!!!!
This tire has deteriorated a good bit since the last time I looked at it. 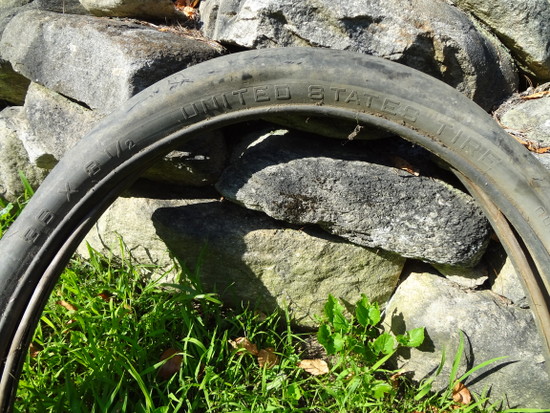 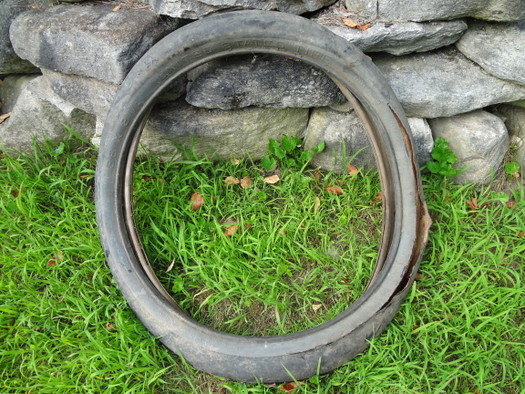 my only US tires piece. cloth banner. haven't even picked it up yet! can't wait to see it in person. Just been too busy moving...chuck

I think I can add to that Keith...this is the best poster i have ever owned....pictures dont do it justice...but made it small for a reason...mm


Kim, that poster is killer!!

Here is a photo of an original white rubber "Chain Tread" made bu US.. It's being used to display an early motoring picnic set that was made to fit inside of a side mounted spare tire. The tire was filthy dirty when it was found, it was soda blasted and looks nes again.. 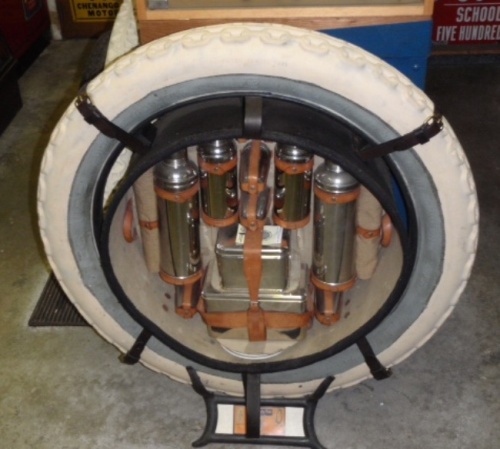 Keith, I remember the day Bob bought that US flange, he was like a kid in a candy store.

Horizontal one was NOS, all dated in the 30's 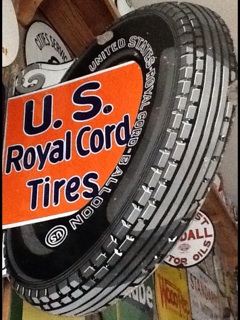