Oldgas.com Home
Who knows of any 30" red Indian signs ?
SERIOUSLY DAVE,,,, rarer than Hen's Teeth..
Come on out , with it where are they
that's like looking for a needle in a hay stack...

Originally Posted By: advertologist
that's like looking for a needle in a hay stack...

I found that needle in the hay stack but unfortunately my needle must have gone through the hay baler when they built the stack..Lol
I think the 30's may be harder than the 24s .
They are out there! I know of three of them.


is one logo'd Red Indian sign more sought & rarer than the other?...

I have a 30". If, I remember correctly, Randy the Gasoline Motor Oils is newer and Mc Coll Frontenac Products are older signs.
Here's mine. Good shine but chipped up. My little helper and the sign are both keepers. 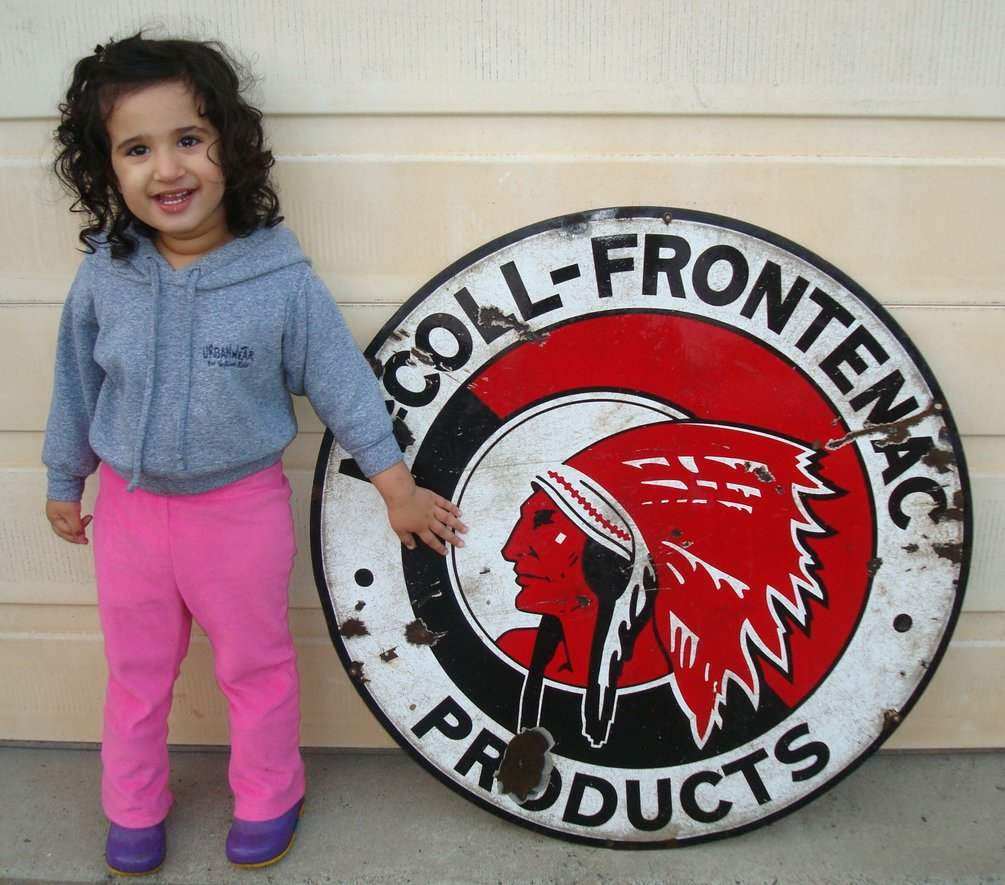 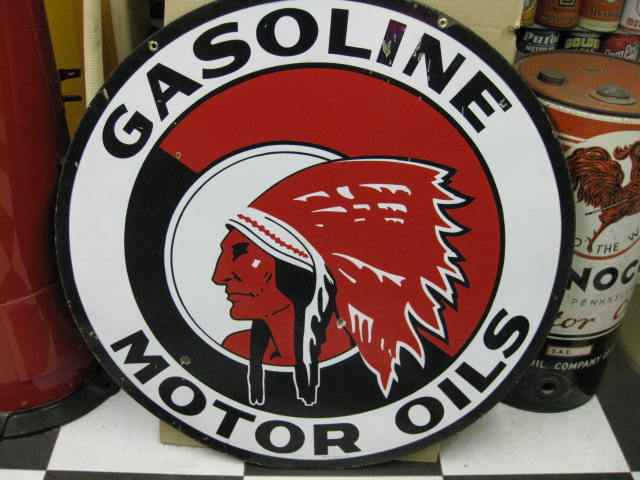 I can't believe the details you guys notice. I only have two Red Indian signs the 30" and a 60". My 60" has the white eyes as shown below. I just don't run into Red Indian around here...tough signs to find in any condition. 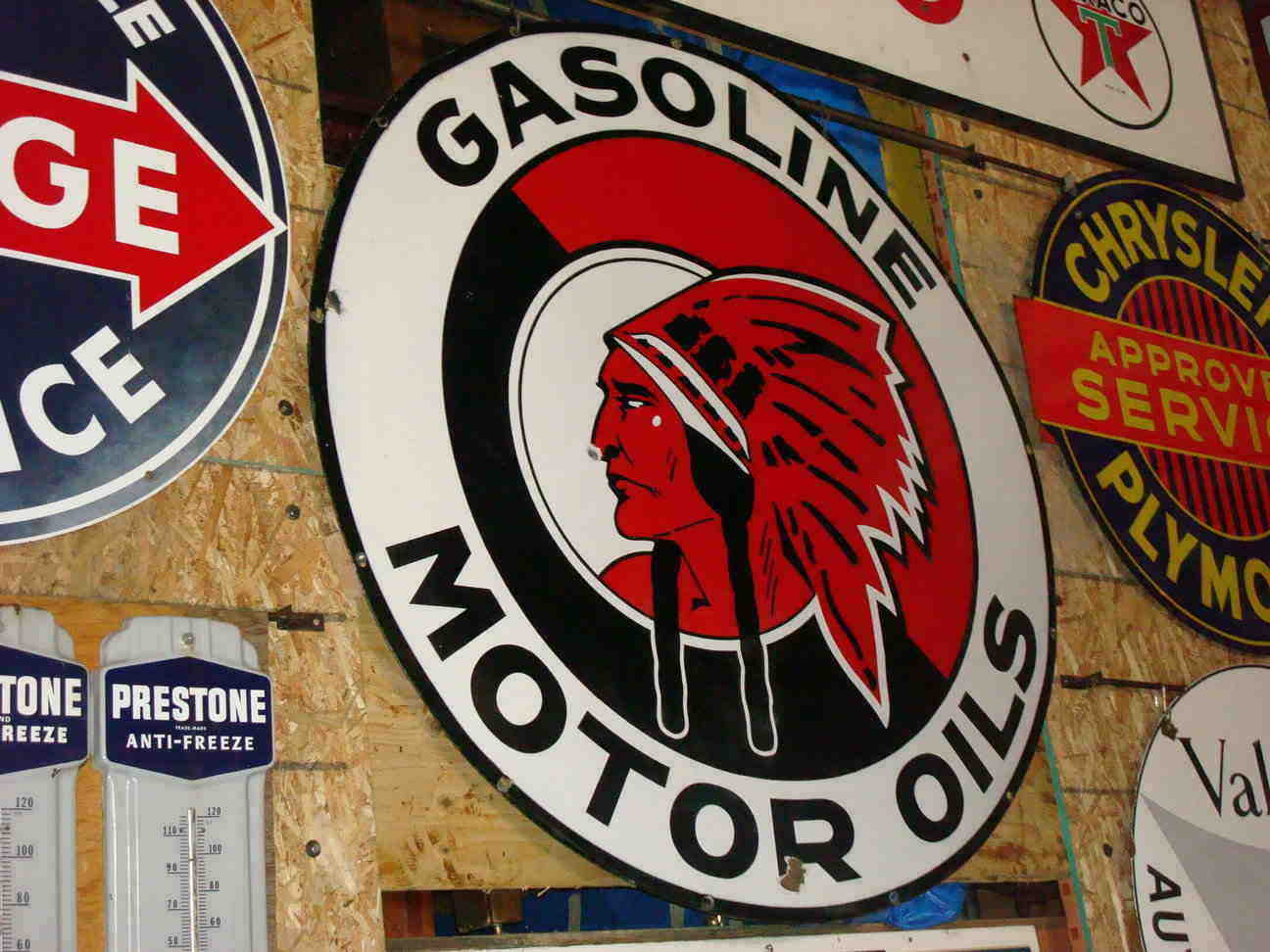 Dave,
which chief is earlier, white eye or black eye,
or is the diffence a different sign maker?-
must be nice too have both, now I need a white eye..

Randy, I don't know. I'm learning as this thread is progressing. We'll have to wait for one of the more experienced collector's to share that knowledge.
Originally Posted By: redindianguy
Who knows of any 30" red Indian signs ?

Is black eye Indian a higher ranking member of the tribe? 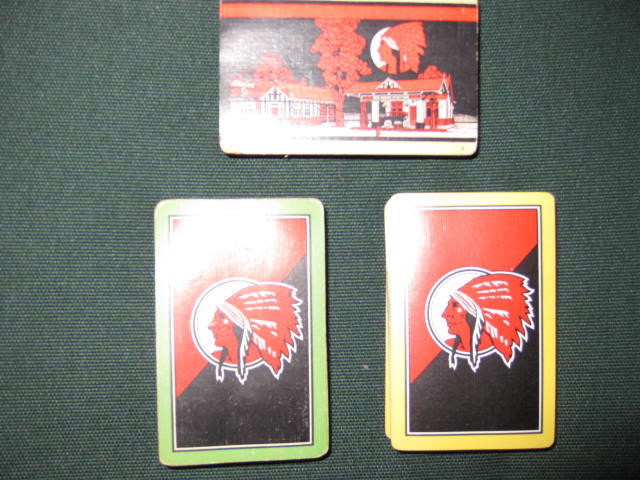 White eye looks older and kinda sad. His face is flattened out like an old retired boxer. The white eyes make him look way less aggressive.

From my research of pictures and conversations with Dave (Redindianguy) here is the order for their signs using #1 as the oldest. BTW, Dave does have an AMAZING collection and is definitely well educated and the go to guy on Red Indian info.

As far as which is the most difficult to find. It's all scarce, but the first 5' sign versions seem more plentiful compared to anything else. The early signage (teens-20's) is definitely hard to find and the Indian head uses a very primitive design compared to the others.
good info...

http://www.youtube.com/watch?v=Rk82cqZDHZM
great posts guys the white eye is earlier . Seen a few 30's but almost always rough . best I have seen is probably an 8 .
I like the older head stuff myself . But cond seems to drive price the most regardless of head . The smaller signs all have the later head as I am pretty sure they were all made in the later 30's to the later to mid 40's . Some are marked 1946 . I try to base everything on pictures and the cars in those pics to date stuff . Unless we have someone who was there , that's all we have left . So many of the stories are lost when these things get sold . Its unfortunate to me that so much of the history is lost . If only the signs could talk .
Originally Posted By: rbonitz
Originally Posted By: advertologist
Originally Posted By: redindianguy
Who knows of any 30" red Indian signs ?

amazing place ray , amazing
There's a really good discussion on Red Indian items over on the other site. Prices may not be accurate but there is some really good info on the history of Red Indian Oil and most of the items they produced. I learned a lot from reading that thread.

http://cheesepitstop.com/viewtopic.php?t=12808
Originally Posted By: Oil King
There's a really good discussion on Red Indian items over on the other site. Prices may not be accurate but there is some really good info on the history of Red Indian Oil and most of the items they produced. I learned a lot from reading that thread.

Yep read it but as with anyone the prices are an opinion . Try and find any good quality Red Indian stuff for sale . Very difficult . Unless its from India .
The last 3 ' in good shape sold for 15,500 plus taxes and premiums. When was the last time an aviation 26 x 72 sold ??? The 26 x 72 red and black which is more common has been extremely strong with condition . The flange signs . there are so few flange signs I would say they are more in the 10 plus range with cond . That aviation and red and black rack sign there are 3 known. So I would put a high value on that sign . etc etc . But there is some great history there, well done .Like any of this stuff , its old , so its worth what anyone is willing to pay .
oil king amazing page you posted
OK so this is timing! Ask and you shall see-a 30" RI DSP for sale. Apparently a little banged up and perforated but said to be 30".
http://www.mcsherryauction.com/sales/14VintageServiceNov8.html
sign of subject... 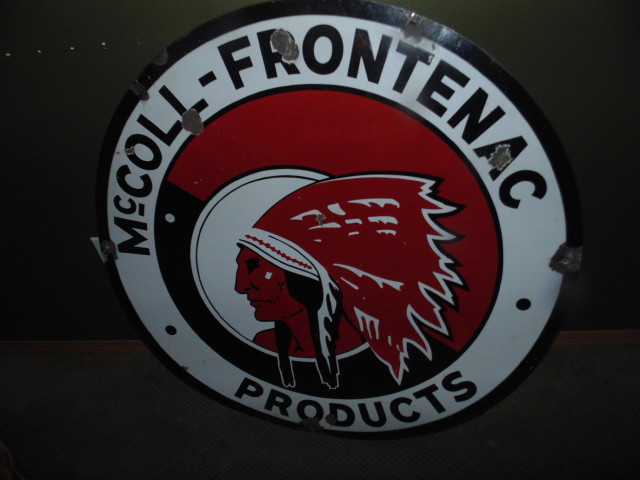 Looking at the mounting holes and listed as double sided, it appears to be a 36" sign
Bang on Junior. It looks like a 36"

my 24" is double sided
Good to know Wes. I have seen pictures of the left and right small signs advertising McColl Frontenac but nothing double sided or nothing with motor oils advertised on them. Would you have a picture of your sign and is it dated or stamped? 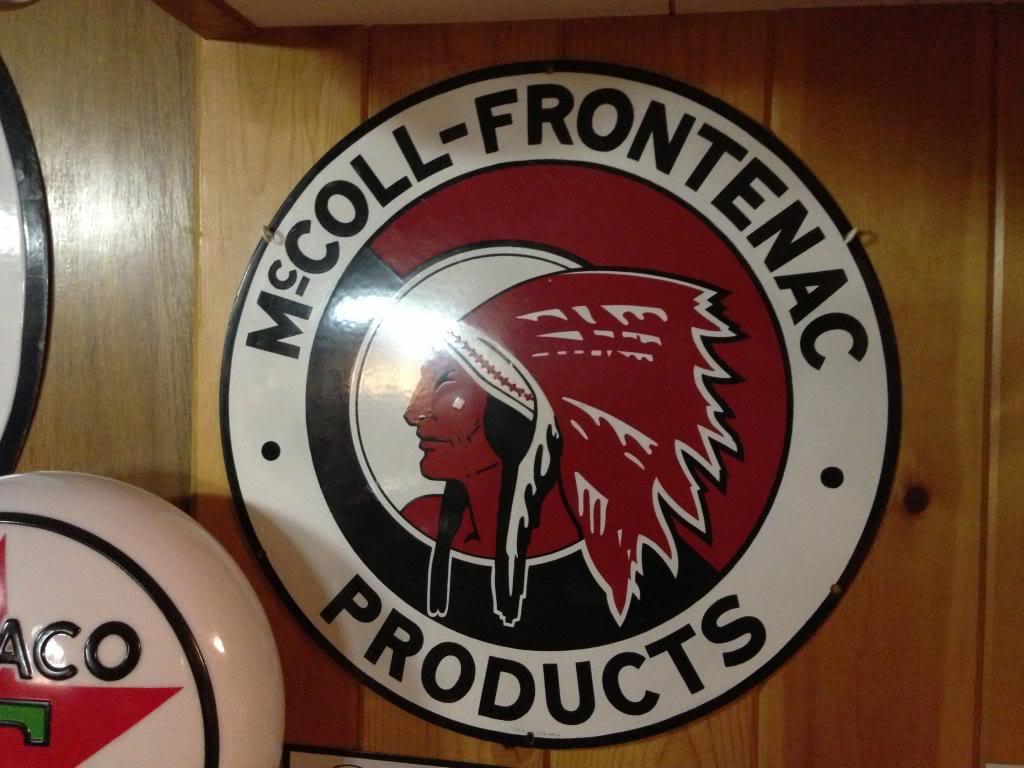 Is it for sale?

it has P&M Orillia on it,, sold it a few years back


Fantastic condition on that sign. I'd like one like that.
It had a very slight crease in the middle and a touchup on the face, but it was nice , condition, 7-7.5
Just back on. I'll email the auctioneer and ask for a measurement.
It did look a little larger but not much to scale the sign against.
The 24 's when you see them in pics on mostly on truck doors and the 30's are mostly on the bank of small tanker trucks . I am assuming that is the reason they were all that I have seen single sided . But now we are finding out there are some double sided . RARE
Went and visited a collection today and asked about the owners 24" sign that he has. His is also double sided but again it's the McColl Frontenac sign. I'm thinking the McColl sign is the only version that came in 24 inch as I have now seen at least a half dozen examples and none of them advertise motor oils or gasoline, only products. I'd like to find one that is for sale.
How much does a 30" McColl-Frontenac Products Sign fetch these days anyway?
© Primarily Petroliana Shop Talk