Oldgas.com Home
Yesterday I had the chance to look at a Pennzoil piece i'd never seen.

Sadly the stairstep style casing had plenty of rust and doubtful it could be restored to a decently smooth surface.

I think it might have been a Cleveland Clock piece so maybe another body could be found.

I've scoured the internet and the few books I have but haven't seen another one like it. Sadly I wasn't able to get a picture of the clock to share.

Has anyone ever seen one of these? And generally would it be worth restoring? That's what the fellow was considering doing but had asked me to look at it to see if it would be worth the restoration.

As an aside, when and how long did Pennzoil use the Owl wise?
Did it hav the flat sheet metal (stairstep face)? Thinking that is an Aztec clock? Just going by memory, without a pic. Chris
Yes. about 3-4 steps. And had 4 light bulbs. It seemed to be missing a bezel as well. The guy thought it might have been a neon ring but from the look of the screw holes I'm pretty sure it was probably a 1/4 trim bezel with probably a shallow glass.
?maybe?maybe, maybe ?..... my avatar cover my first 2 or 3 words. Chris 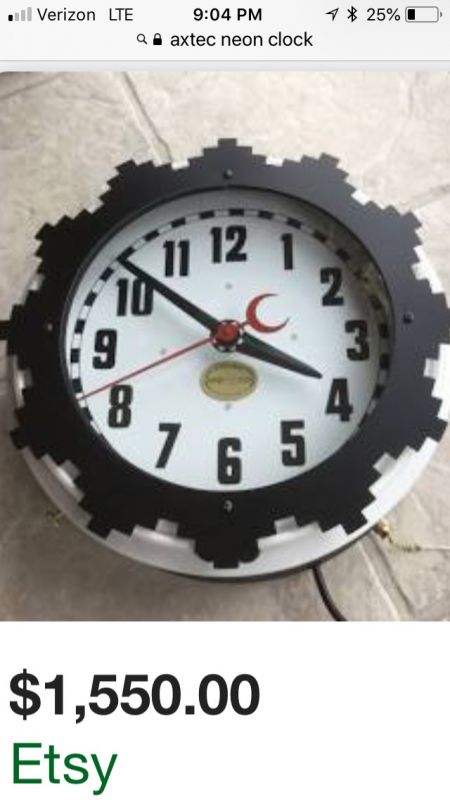 I have 149 saved pictures of Pennzoil ads. The first time I see the owls show up is 1937 and the last time is 1942. Shown below. 37 on left. 42 on right.
Now the accuracy of the dates on these is only as good as the source where I got them. They are not dated.
Not that its definitive, but I do have several ads from 1936 and several from 1943 and none of them have the owls.
But if this info holds true, it seems the owls were a short lived campaign.
Now from the book, American Oil Cans, it shows the first can with owls being the Streamliner can but only dates it as being from teh 30's. And the last can it shows with owls is the United Airlines can and it calls this as being from teh 40's. It does not get any more specific than that.
Hope that helps.
Maybe someone else has further info.